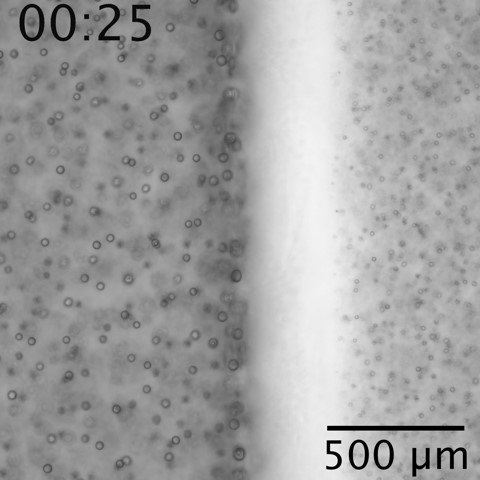 Time evolution of droplets at the interface of the stiffness gradient

In a brand-new paper that appeared in Nature Physics, a collaboration of the group of David Zwicker at the Max Planck Institute for Dynamics and Self-Organization in Göttingen and the group of Eric Dufresne at ETH Zürich demonstrate some surprising effects of polymer networks on droplet growth. 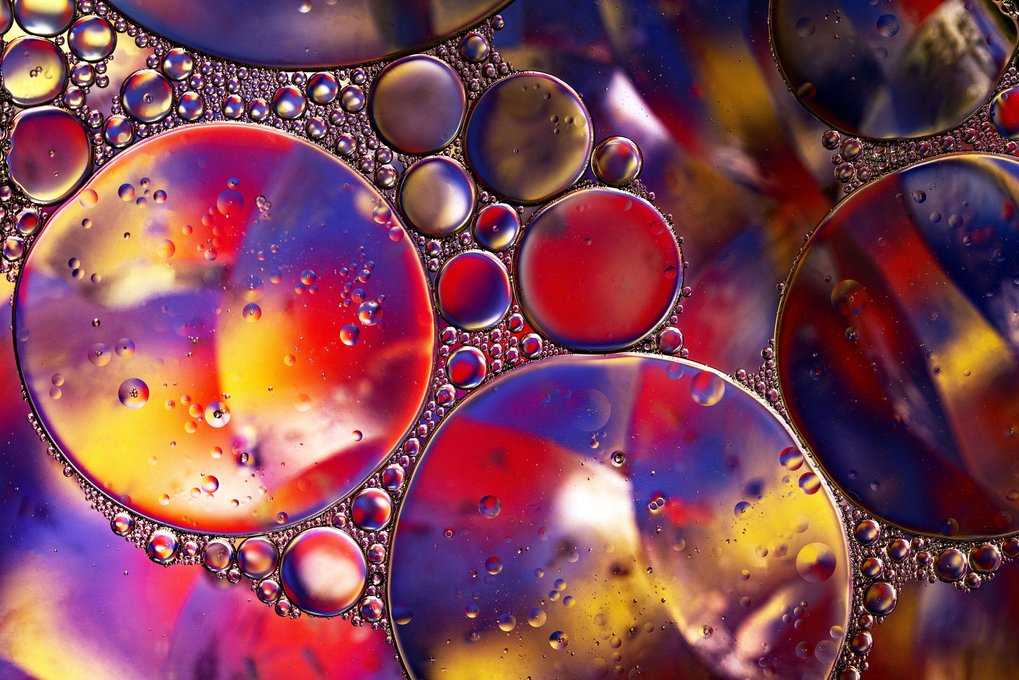 This work may provide new avenues for manufacturing micropatterns and it may shed light on how membrane-less organelles are controlled inside cells. In both situations, tiny droplets need to be spatially arranged and stabilized over long periods.

Stable droplets are generally hard to come by, also in more familiar settings. When you make salad dressing, you stir oil and vinegar vigorously to make small droplets, but over time they tend to merge to one big oil droplet on top. Covering the surface of a droplet with a soapy layer can make it last much longer. This is why we add dish soap when we want to get oil off of pots and plates.

Similar problems arise inside biological cells, where droplets form small compartments that organize the cell. In particular, cells need to control the count, size, and location of these droplets to be fully functional. So far, it is unclear how they achieve this challenging task. One important ingredient of cells are long, stable polymers that form the cytoskeleton, which gives them their shape, strength, and motility. It has been hypothesized that the elastic properties of these networks affect droplet formation and can be exploited by cells to control droplets.

From big to small and small to big 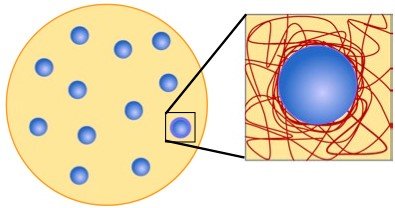 In the new publication, the researchers from MPIDS Göttingen and ETH Zürich demonstrate that a polymer network prevents droplets from merging and growing bigger, removing the need for a soapy layer. Moreover, the polymer network squeezes growing droplets, which has two interesting side effects. First, a network can squeeze a droplet so hard that it dissolves into the fluid around it. Second, droplets move from stiffer to softer parts of the network. They don’t perform this by simply sliding from one place to another, but they tend to dissolve in the stiffer parts while re-condensing and growing in the softer parts.

The team doesn’t know if these processes are at play in living cells, but are working hard to get to the bottom of it. In the meantime, they continue to develop applications, ranging from micropatterning to structural color, where the fabulous control that polymers can provide over liquid droplets could offer some advantages.