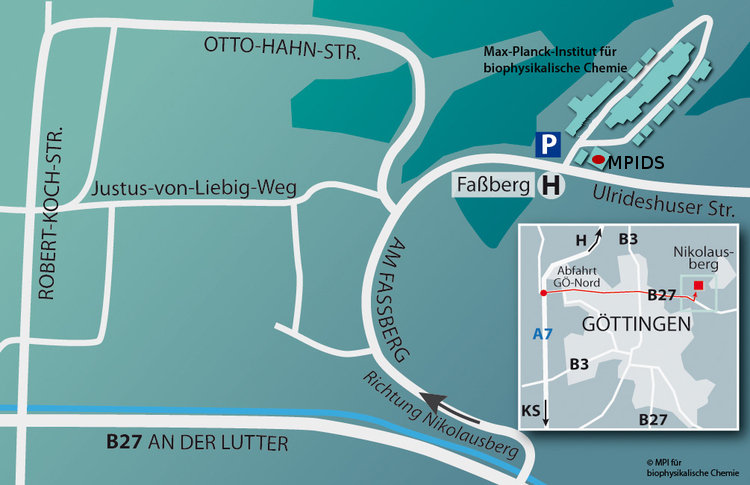 The MPIDS still maintains a branch in its former location, in the Bunsenstrasse in Göttingen, on the area of the German Aerospace Center (DLR). Also the guest houses of the MPIDS are located in the Bunsenstraße.

With the ICE (high speed train) via Kassel or Hannover to Göttingen. From the train station, a taxi takes you to the institute in approximately 15 minutes. Alternatively, the buses of lines 21, 22 and 23 (bus platform D, in front of the east exit of the station) take you in 17 minutes to the stop "Faßberg", which is right in front of the institute. From the town center (stops: Geismartor, Jüdenstraße and Weender Straße Ost) you can take bus line 22 in the direction "Nikolausberg" and get off at "Faßberg".

Via Kassel or Hannover on the highway A7, take the exit "Göttingen Nord". Drive straight along the B27 towards Braunlage. After approximately 6 km, turn left towards Nikolausberg (signposted). Take the third left to enter the institute's campus. Our institute is the first building to the right.

Frankfurt Airport (FRA):
There are two separate train stations at Frankfurt airport, one for regional trains and the other for long-distance trains. Direct trains to Göttingen (towards either Hamburg or Berlin) depart from the long-distance station every two to four hours. Trains to Frankfurt's main train station (Hauptbahnhof) depart frequently from the airport's regional station. From here two trains per hour depart for Göttingen. With the ICE (high speed train) the trip from Frankfurt to Göttingen takes about 2 hours.
By car, the trip from Frankfurt airport to Göttingen takes about three hours.

Hannover Airport (HAJ):
From the airport, the S-Bahn (suburban train) departs every 30 minutes for Hannover's main train station. From there, ICEs and regional trains depart several times an hour for Göttingen. Travel time with the ICE is approx. 30 minutes, and the last train departs at 9 pm.