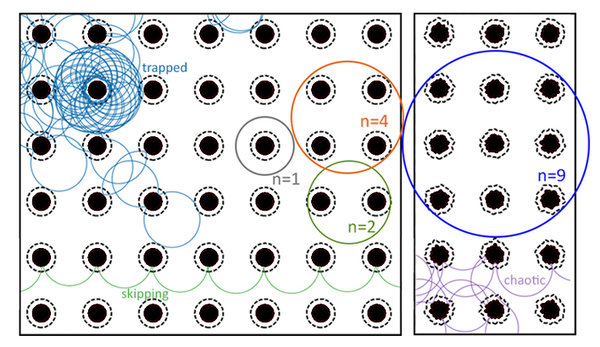 Understanding electron transport in ballistic nanostructures is crucial for building electronics with numerous applications, ranging from transistors to solar panels. Besides potential technological applications however, ballistic transport is full of rich and diverse physics, being the intersection point of areas like e.g. Quantum Chaos, Condensed Matter, Nonlinear Dynamics and more.

A recently fabricated material, graphene, promises to be the foundation of new-age electronics. Graphene is a two-dimensional system made entirely of carbon atoms with many exotic proprties, one of which is that the low-energy excitations of the system behave as massless relativistic particles (called Dirac particles). Besides the nobel prize in physics (2010), there are countless theoretical works that tackle the exotic phenomena of this material. Suprisingly however, fabricating ballistic graphene devices became a reality only in the recent years and thus, theoretical work on the subject is more sparse.

We approach ballistic transport in graphene from many perspectives, both classical models, semi-classical theories as well as quantum transport techniques. Classical models can raise our understanding of electron dynamics in a fundamental, intuitive level. For example, using a classical model, we were able to explain the phenomenon of commensurability peaks, which is universally present in the measurement of the resistance of a two-dimensional material patterned with an antidot super-lattice.