The bubbling of order

Cavitation describes the formation of small bubbles in liquids and their subsequent decay. The Dutch physicist Christiaan Huygens first discovered the phenomenon of cavitation in 1672, and researchers in hydrodynamics have been busy understanding this process ever since. Cavitation is the cause of very practical problems because when the bubbles collapse rapidly, they release enormous energies. For example, cavitation bubbles cause annual repair costs of millions of dollars to propellers spinning in sea water. The so-called cavitation fracture occurs because the surface is damaged by the high mechanical stresses. A research-team from the Max Planck Institute for Dynamics and Self-Organization (MPIDS) in Göttingen, the Technical University of Berlin (TU Berlin) and the Swiss Federal Institute of Technology Zurich (ETH Zurich) has now shown that cavitation can also occur at a very small scale in liquids with molecular order. Thus, liquid crystals can very easily cavitate when flowing through microfluidic channels. Based on their results, the researchers hope in the future to develop bubble formation in different fluids, as well as to better understand processes in the cell, since biological building blocks of the cell have similar properties as liquid crystals. These results are now published by Tillmann Stieger and collaborators in the journal Nature Communications.

Order is the key

If a liquid moves quickly with respect to a solid object, the pressure drops. If this pressure drop reaches the vapor pressure, cavitation occurs. The phenomenon is known as hydrodynamic cavitation. The team of researchers from Göttingen, Berlin and Zurich has now found that cavitation in liquid crystals occurs already under very mild conditions - in contrast to the hitherto known aggressive methods. Due to their material properties, the molecules of the liquid crystals arrange parallel to one another in the flow, so that the formation of bubbles is energetically favored.

As in the big so in the small

This work originates from investigations by Dr. Anupam Sengupta during his PhD work at the MPIDS, who is now working as Human Frontiers Cross-Disciplinary Fellow in Zurich. The researchers discovered that liquid crystals cavitate very easily when they flow in tiny channels. In their experiments, they flowed liquid crystals in tiny channels with a diameter of 100 micrometers (the width of a hair). Downstream of an obstruction in the channel a pressure drop forms, where the scientists observed cavitation. Dr. Sengupta teamed up with Dr. Marco G. Mazza, head of a research group in the Department of Complex Fluids at the MPIDS, to carry out molecular dynamics simulations and study the problem theoretically. 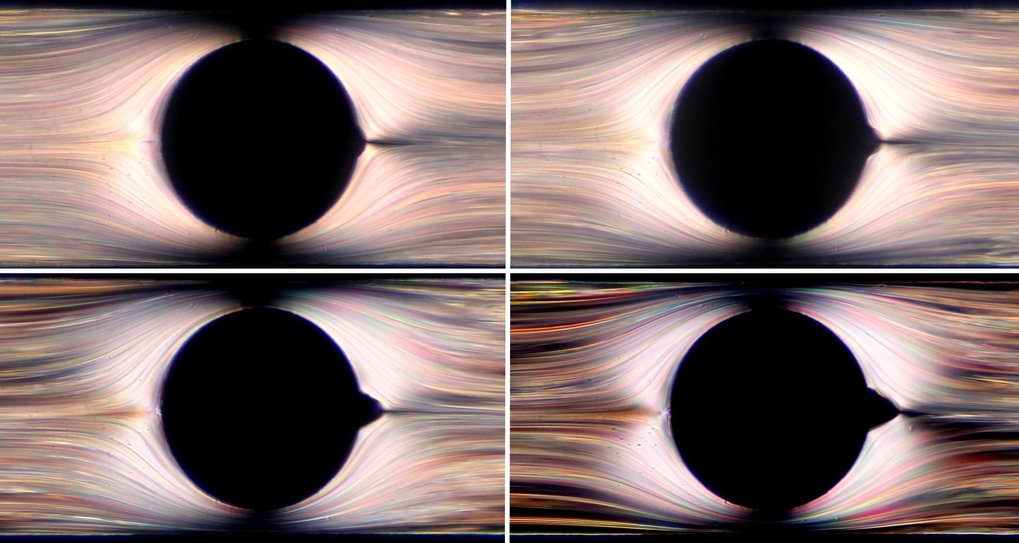 The researchers observed that the more the molecules are aligned in the liquid crystals, the easier it is to cavitate. This means that the degree of order of the liquid crystals regulates the cavitation process. This discovery has implications for a serious limitation of microfluidics, namely the mixing of liquids in microfluidic devices. In the case of flows at the microscale, the mixing occurs mainly by molecular diffusion, a very slow process. The growth of cavitation bubbles and their breakdown can considerably accelerate the mixing process.
"This is an exciting new development in the more-than-100 year old field of liquid crystal research", emphasizes Dr. Marco G. Mazza. “Our work opens new possibilities to manipulate hydrodynamic flow through the order and topology of liquid crystals. This will be a direction we will pursue in the future, says Mazza concluding.