The experimental research group “Dynamics of Fluid and Biological Interfaces” headed by Dr. Oliver Bäumchen has developed a scientific focus on the physics of soft and biological matter at interfaces. The Group's research interests cross the classical boundaries of physics, biology, chemistry and engineering, combining concepts from soft matter physics, biophysics, statistical physics far from equilibrium, fluid dynamics, and micro- and nanofluidics. [more]

The adhesion of Chlamydomonas, a unicellular alga, to surfaces is light-dependent

Sunlight allows green algae to do more than just carry out photosynthesis. Some unicellular algae actually use light to switch the adhesion of their flagella to surfaces on and off – a phenomenon first discovered by physicists at the Göttingen Max Planck Institute for Dynamics and Self-Organization. These findings are particularly relevant to the development of bioreactors in which algae serve as a renewable raw material for producing biofuels. 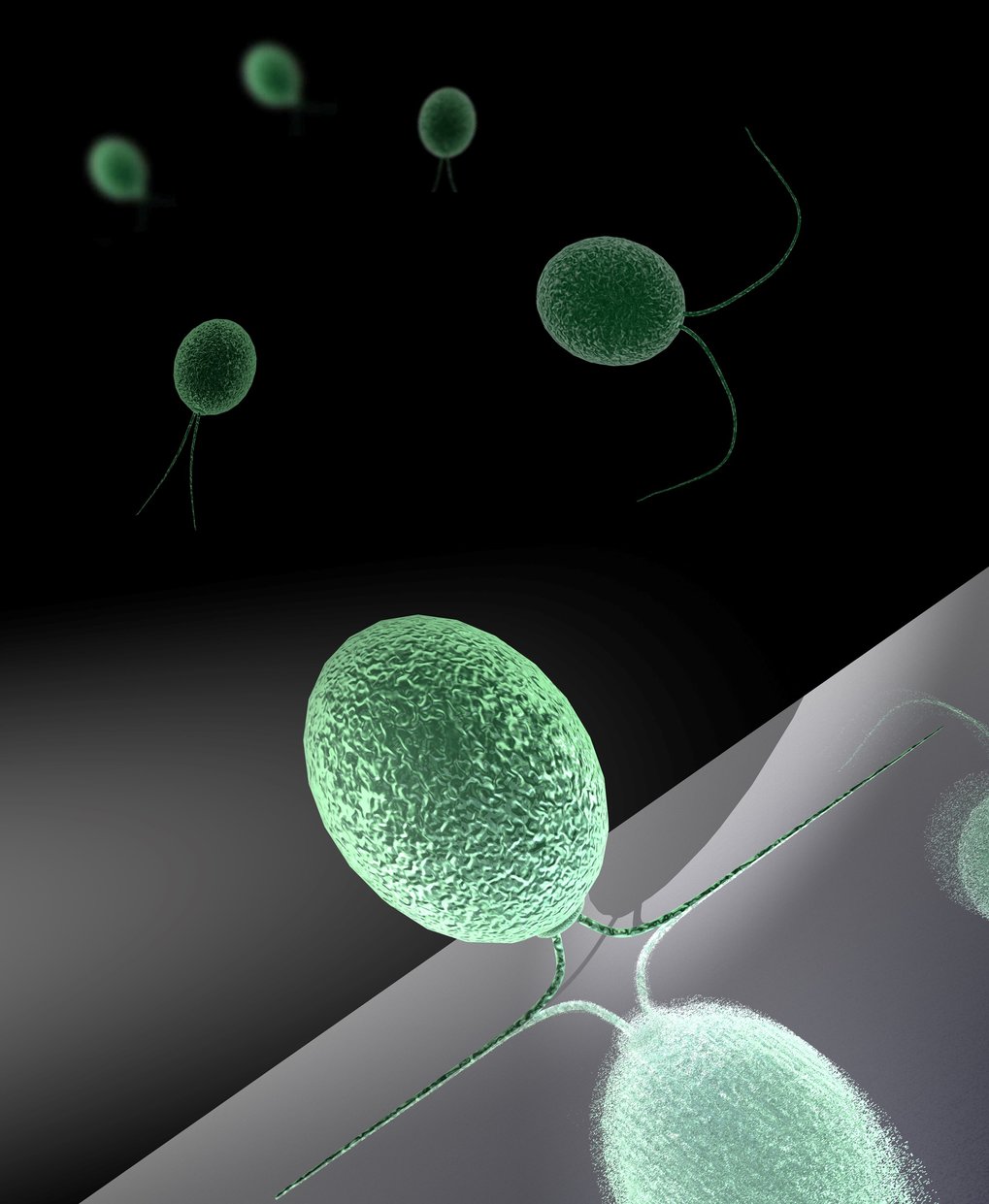 In everyday life, green algae tend to be bad news. In damp weather, microscopic unicellular algae form a slimy layer on garden furniture and house walls; during warm summers, they form a scum on the surface of garden ponds and water-treatment tanks. But green algae can also be beneficial. For years now algae have been cultivated in bioreactors, in large facilities comprised of glass tubes, to produce biofuels. However, green algae have a property that makes this process difficult: using small hairs, known as flagella, they adhere to surfaces. In bioreactors, this results in a green biofilm forming on the walls of the glass tubes. As a result, less light penetrates into the reactor. The biofilm reduces the ability of other algae in the reactor to carry out photosynthesis, thus making the bioreactor less efficient.

Chlamydomonas do not stick in red light

A research team led by Oliver Bäumchen, a physicist at the Max Planck Institute for Dynamics and Self-Organization in Göttingen, has now made a discovery that could boost the efficiency of bioreactors. “In experiments with green algae, we found that the algae are sticky and able to adhere to surfaces only under certain light conditions,” Oliver Bäumchen says.

The scientist has been focused on the adhesive properties of microorganisms for many years. He is primarily interested in flagella and the mechanisms by which these tiny hair-like structures can exert surprisingly strong adhesive forces. He and his staff devised a precise sensor to measure the forces involved: an ultra-thin glass micropipette that can aspire a single green algal cell. Using the micropipette, they measure the force needed to detach a living cell from a surface.

Bäumchen’s doctoral student, Christian Kreis, found that the adhesion of algae to surfaces can be controlled by light. Experimenting with the green alga Chlamydomonas, he found that it consistently exhibited a strong adhesive force only under white light. Under red light, the cells did not adhere to surfaces at all. It has long been known that many microorganisms orientate themselves to light and, for example, swim towards a light source. However, it was not previously known that the green alga’s adhesion mechanism can be switched on and off with light. 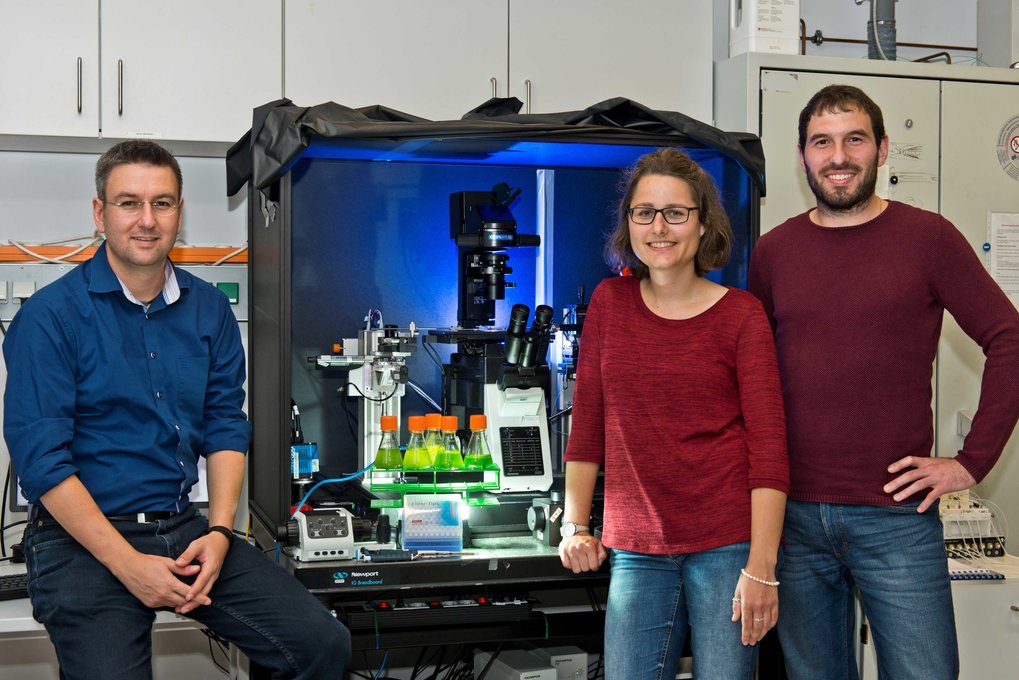 Group photo with green algae: Oliver Bäumchen, Christine Linne and Christian Kreis (from left to right) are studying the adhesion of algae on surfaces.

Group photo with green algae: Oliver Bäumchen, Christine Linne and Christian Kreis (from left to right) are studying the adhesion of algae on surfaces.

Kreis investigated the light response more closely and found that Chlamydomonas exclusively sticks to surfaces when exposed to blue light. The alga uses a number of special light-sensitive proteins to sense the light. “We believe that light-switchable adhesiveness may be a product of evolution,” Christian Kreis says. Unlike marine phytoplankton, these related microorganisms usually live in wet soils where they often encounter surfaces. “If those surfaces are exposed to sunlight, this clever mechanism enables the algae to latch on to them and start carrying out photosynthesis,” the researcher explains.

Algae with modified blue-light photoreceptors might not form biofilms

This finding does not in itself provide a way to prevent algal deposits from forming on the glass walls of bioreactors. Exposing bioreactors to the red light only to switch off adhesion does not work, because green algae also require blue light for photosynthesis. Oliver Bäumchen and Christian Kreis are therefore taking a different approach. “We’ve now teamed up with microbiologists who have a great deal of experience with green algae,” Bäumchen says. “We plan to study cells in which the various blue-light photoreceptors are blocked to find out which of those photoreceptors is in fact responsible for triggering the adhesive properties.” If algae with modified blue-light photoreceptors could be grown in large volumes, we might be able to use them in bioreactors without the annoyance of biofilms forming on the surfaces.

Oliver Bäumchen’s research team has focussed on the switchable adhesion of green algae for several reasons: “It is generally interesting to understand the phenomenon of surface adhesion. After all, the adhesion forces are enormous in relation to the cells’ size,” Bäumchen says. He is also studying flagella because their construction principle is almost identical to that of cilia in the human body, for example in the lungs.

Christian Kreis is also concerned with ways to prevent the formation of algal biofilms. He is currently investigating whether adhesion can be switched on and off by triggers other than light, for example by surfaces carrying weak electrical charges. “Biofilms are troublesome in many applications,” the researcher says. “If we could design surfaces in such a way that they prevent microorganisms to stick to them, that would be a boon for many applications in medicine, biotechnology and chemical engineering.”