Göttingen giants on whose shoulders we stand

As part of the "Forum Wissen", Director Ramin Golestanian guided a group of 20 interested guests through the historic city cemetery in Göttingen. His theme: "Göttingen giants on whose shoulders we stand" - mathematicians and physicists whose science continues to influence research and teaching to this day.

The tour begins with two real giants, Wilhelm Weber, one of the Göttingen Seven, and together with Carl-Friedrich Gauss the developers of one of the first telegraph and his grave neighbor Max Born, who was the first to describe quantum mechanics. Even though the two physicists Weber and Born did not know each other because they lived 100 years apart, they were both extremely steadfast personalities of science, emphasizes Director Golestanian. For him Wilhelm Weber and Max Born thus embody the Göttingen giants par excellence.

Keep moving with crackling rain and small wind gusts in this cold spring evening, to the graves of the other famous physicists and mathematicians, which make the Göttinger city cemetery a knowledge landscape. Felix Klein, who taught mathematics at Göttingen University and also taught Max Planck, among others, played a major role in this. In 1886 he was called to Göttingen, 12 years later, in 1898 he brought David Hilbert to Göttingen. Together they founded the “Göttinger Vereinigung zur Förderung der angewandten Mathematik und Physik”, new professorship could be founded, for example for geophysics and physical chemistry. Felix Klein also advocated a university education for women. One of his scientific inventions, the "Kleinsche Flasche", was demonstrated by MPIDS Director Golestanian during his one-and-a-half-hour tour using a self-made cardboard roll. The “Kleinsche Flasche” is a curved glass container in which the inside simultaneously represents the outside. 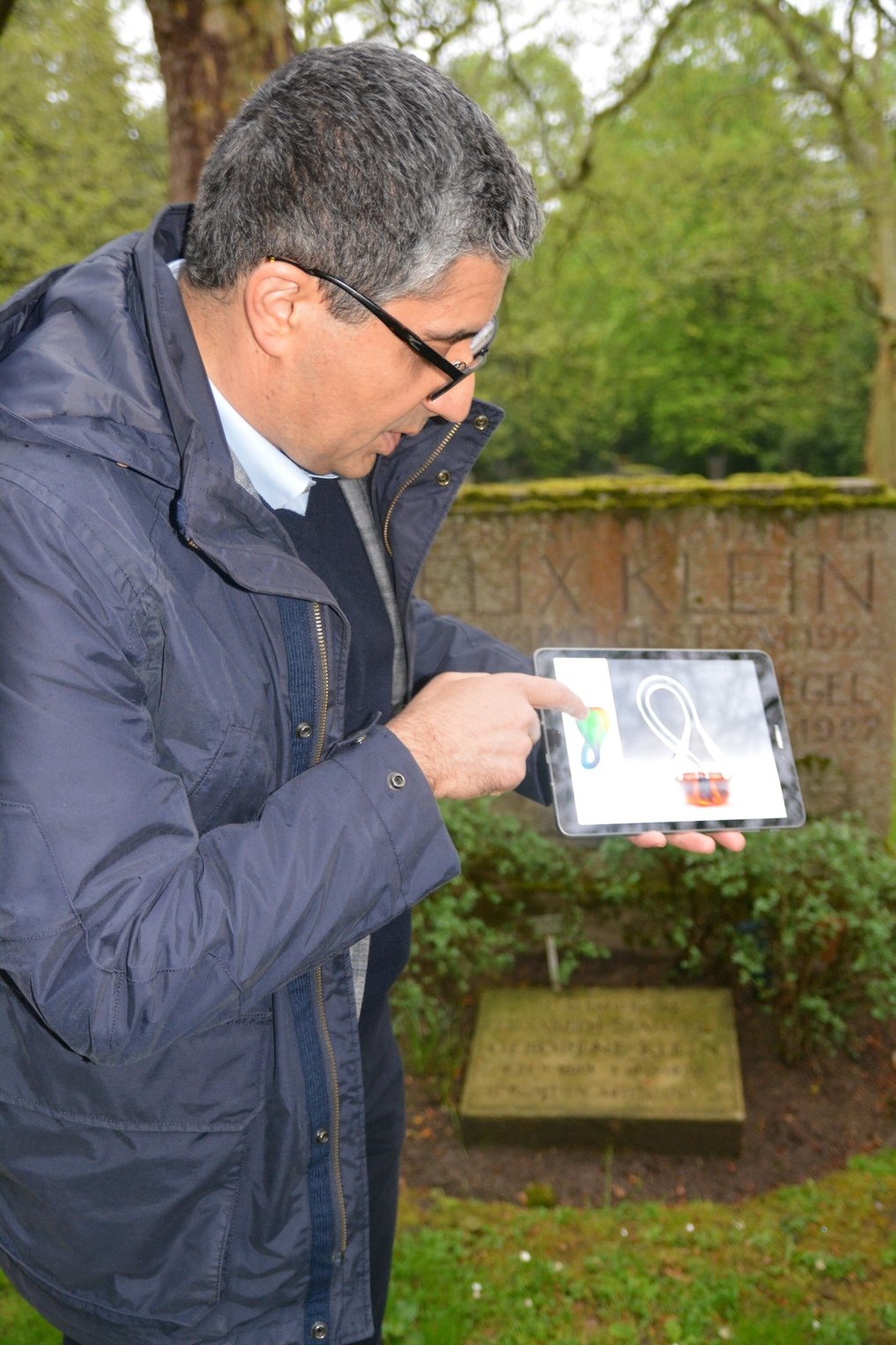 It was also the commitment of Felix Klein and David Hilbert that brought the mathematician Emmy Noether to Göttingen. Emmy Noether made fundamental contributions to abstract algebra and theoretical physics. In particular, she revolutionised the theory of rings, fields and algebras. When Emmy Noether applied for a habilitation at Göttingen University in November 1915, it was very controversially discussed in the purely male faculty. But in the end Felix Klein and David Hilbert prevailed. In a meeting David Hilbert exclaimed out loud: "Gentlemen, a faculty is not a swimming baths". Emmy Noether was allowed to habilitate. A very interesting scientist for the MPI for Dynamics and Self-Organization was Max von Laue, who received the Nobel Prize in 1914 for his "Discovery of X-rays as crystals pass through crystals". During the Nazi dictatorship, Max von Laue stood up for his Jewish colleagues, and a lifelong friendship also united him with Albert Einstein. In 1957 Max von Laue was one of the signatories of the "Göttinger Erklärung der 18 Atomforscher" against the arming of the Bundeswehr with nuclear weapons. Max von Laue lived for several years in the MPIDS guest house in Bunsenstraße, where he was also involved in the founding of the Max Planck Society 71 years ago.

With the words of David Hilbert: "We must know, we will know". - engraved on Hilbert's tombstone, physicist Golestanian ends his tour.

His conclusion: "The many brilliant mathematicians and physicists, the giants of past centuries, have made the mathematics and physics faculty of the University of Göttingen a model for many international research institutions - to this day.

In early summer, Director Golestanian will again offer a guided tour of the "Göttingen Giants on whose Shoulders We Stand" at the City Cemetery. The date will be announced in advance. (CH)