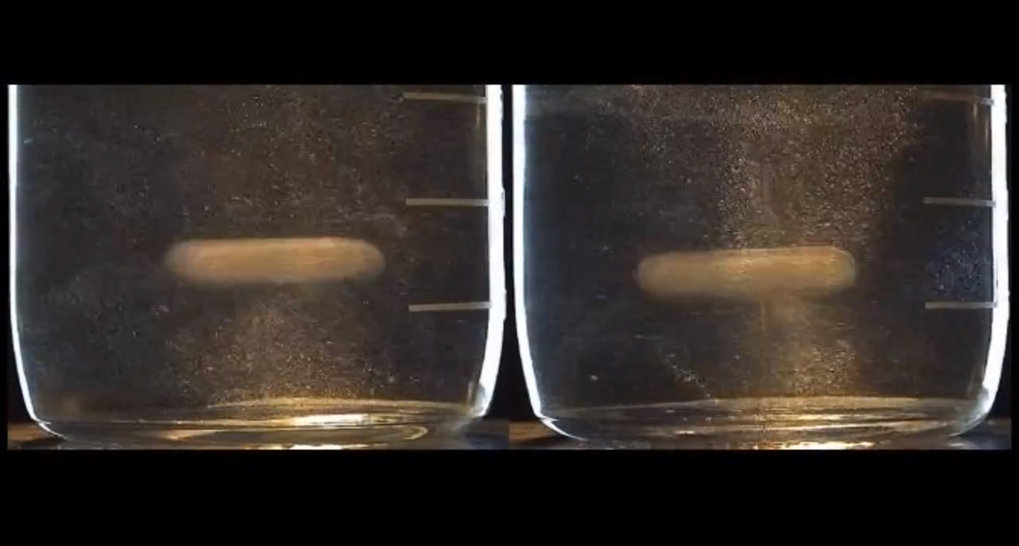 Stable and unstable levitation. Side-by-side comparison of levitation in water-glycerol mixtures, for two noteworthy cases: levitation that becomes unstable over approximately 30 seconds (left, streaming Reynolds number Res = 11.7), and levitation that is permanently stable (right, Res = 400). Drive speed 129 rad s-1. Mika flakes added to give contrast between the flow patterns generated by the flea in each case. Video playback in real-time.

Magnetic Stirrer Levitation: The Flight of the Humble Flea

The idea of levitation has inspired technology such as Maglev trains, and innumerable works of fiction, like hover-boards from the „Back to the Future“ trilogy or even a common image of a witch flying on her broomstick over a sleeping village. However, most real-world applications require either highly specialized equipment, or sub-zero temperatures, which makes them not easily practicable in our everyday life. Here, a researcher from the Max Planck Institute for Dynamics and Self-organization (MPIDS) demonstrates a ground-breaking approach that will make magnetic levitation more accessible to a wider range of technical applications. 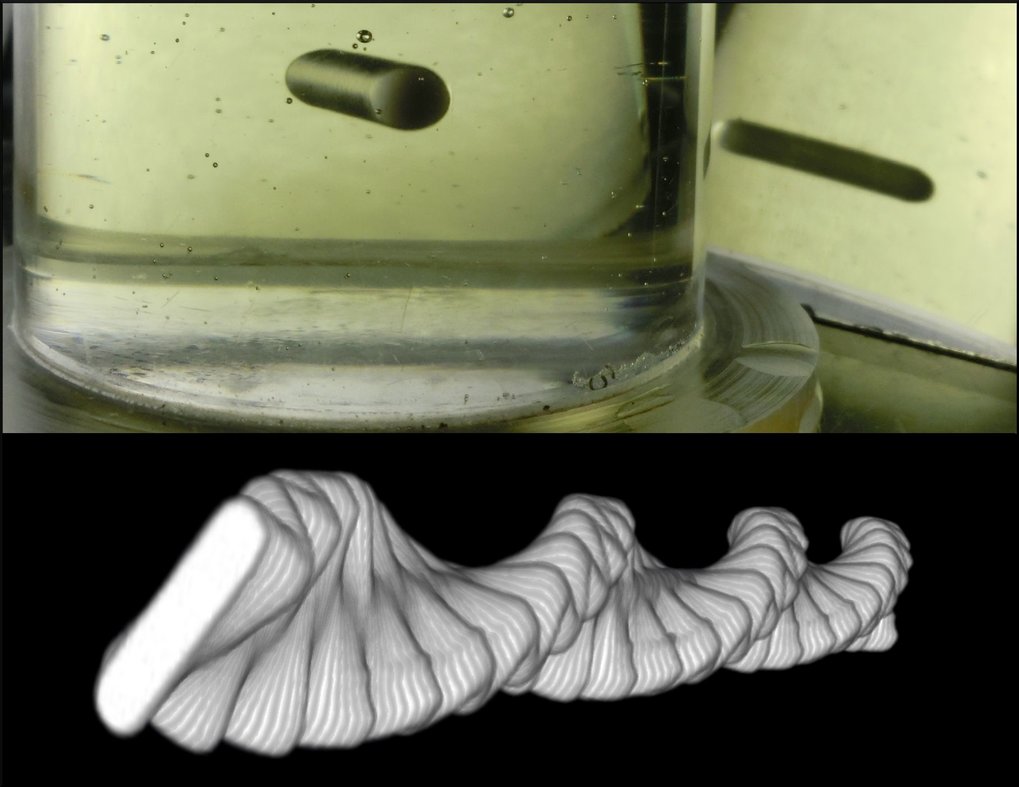 Top: Image of the levitating flea in Castor Oil. Bottom: A 3D spiral rendered by combining experimental images of the flea over a 1 s period as it levitates, demonstrating the dynamics of the levitating behaviour, which combines low frequency spinning and high frequency oscillation.

Top: Image of the levitating flea in Castor Oil. Bottom: A 3D spiral rendered by combining experimental images of the flea over a 1 s period as it levitates, demonstrating the dynamics of the levitating behaviour, which combines low frequency spinning and high frequency oscillation.

The new method uses a simple tool that most laboratories world-wide already possess: a magnetic stirrer, a device that employs a rotating magnetic field to cause a stirring bar immersed in a liquid to spin very quickly, thus mixing it. Since its invention in 1942, it has been known that if such a stirrer is driven too quickly, the stirring bar-magnet will hop erratically on the base of the container – hence its nickname „the flea“. MPIDS scientist Dr. Kyle Baldwin finds that if the viscosity of the liquid in a container is similar to that of honey, the flea stops hopping and instead jumps up and levitates within the liquid.  „We stumbled upon this phenomenon whilst mixing high viscosity polymer solutions, and were fascinated,“ recalls Kyle, the first author of the paper. Alongside researchers from Nottingham, Kyle carefully analyzed the motion of the levitating flea in a large series of experiments and found that its motion is systematic. The stirring bar waggles back-and-forth, pumping fluid out to the sides, which experiment and simulations show stabilizes its position. Intriguingly, if the viscosity is reduced, the fluid is pumped in the opposite direction, and the flea falls.

„Our discovery should motivate the design of bi-directional fluidic pumps, improve understanding of effective swimming methods, and provide a new levitation route for container-less storage or friction-less transport", explains Dr. Baldwin. This fundamental discovery could be used in robotics and provide new opportunities in nano-technology and medicine, such as providing easily controllable artificial micro swimmers for a better diagnostic. New horizons that are being opened by the discovery are truly breath taking! However, it is still unlikely to make flying broomsticks a reality.