Gazing through the keyhole

Thanks to the researchers from the Max Planck Institute for Dynamics and Self-Organization disease epidemics, stock market crashes and neuronal networks in the brain can be better investigated in the future

When we study complex or spatially extensive systems, we can often only observe a fraction of all the components involved. How can we still draw conclusions about the entire system? Researchers at the Max Planck Institute for Dynamics and Self-Organization (MPIDS) in Göttingen, Germany have now developed a method that can make such investigations much more reliable and precise. Their results were published today in  Nature Communications 9 (2018) 2325. 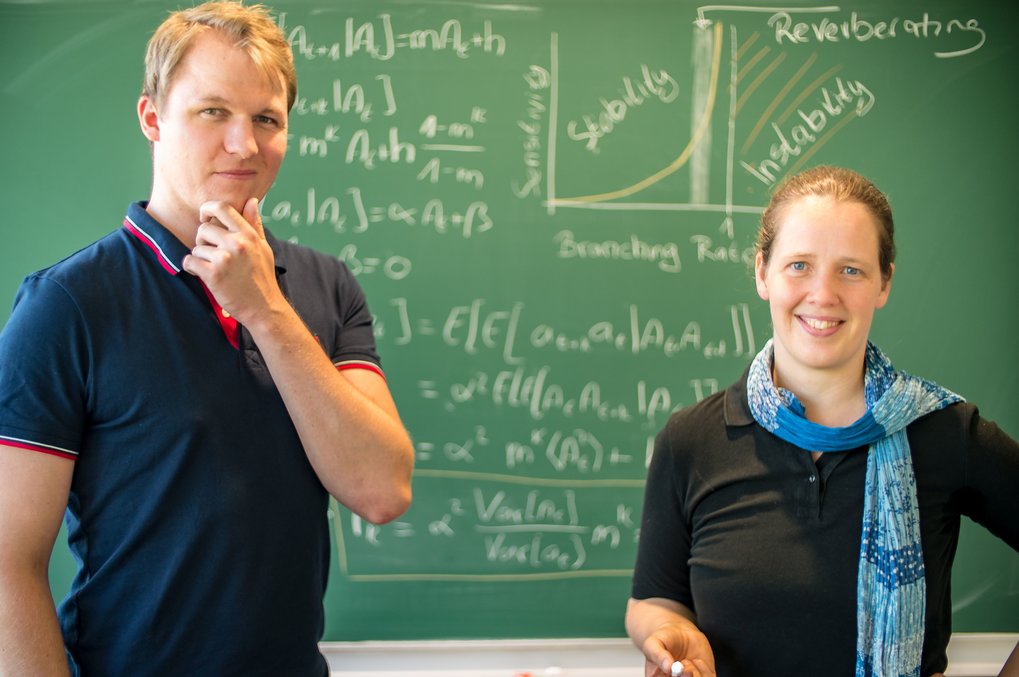 What can we learn about a system if we can only observe a tiny part of it? For example, what can we say about the brain if we can only measure the activity of a few hundred of the millions or billions of neurons? Dr. Viola Priesemann, head of the Max Planck Research Group for the Theory of Neuronal Systems at MPIDS, and her colleague Jens Wilting are investigating precisely this question. In their research of the dynamics of neuronal networks, they were confronted with a problem that is relevant far beyond  brain research: Almost always when  we try to investigate a spatially extended system with many interacting components, only a tiny fraction of this system can be observed. For example, many diseases have a high number of unreported cases, which makes it difficult to characterise the disease  spreading behaviour; in most ecosystems, the distribution and reproduction of many species can only be roughly estimated. However, a reliable characterisation of this spreading behaviour would be indispensable in order to  better assess the risk of major disease outbreaks or the vaccination protection of the population. For these cases, the Göttingen researchers developed a new method that allows a far more reliable characterization than has so far  been possible, even when data are incomplete. „Our method allows us to characterize the dynamic state of the overall system, even if only a small part of the system can be observed. It is as if someone wants to explore the interaction of a soccer game, in which the camera only follows a few of the players. We could show that conventional methods did not take into account that the interaction between the observed components is often not representative for the interaction of all existing components. Therefore, these methods provide highly distorted results. In contrast, our new method correlates the observed behavior at different points in time such that the unobserved information can be replaced,“ explains the first author of the study Jens Wilting. The „system“ in question can be chosen freely. For example, the algorithm does not care whether it should analyse the spread of infections, the dynamics of financial markets or the cooperation of a neural network in a living organism.

In order to test the new method, the scientists first analysed the Germany-wide disease data of three infectious diseases that have to be reported to the Robert Koch Institute. As was to be expected, the estimator has identified the highly contagious norovirus as the greatest source of danger for major outbreaks, whereas measles, for which a comprehensive vaccination protection and immunity exists, spreads much less. It is important to note that the estimation of the spread was still correct even when the researchers omitted 99% of the data. They assumed, so to speak, that only 1% of all infected people would go to the doctor. This shows that the method is very robust, even if only a small part of the system can be observed. Most recently, the researchers investigated the spread of multi-resistant MRSA germs, which are often found in German hospitals and can become very dangerous, especially for people with a weakened immune system. However, since infection is symptom-free for most people, a particularly high number of unreported cases can be assumed. The new method is therefore particularly useful in this case. Interestingly, the investigation has shown that there is hardly any direct transmission of MRSA germs within the population. This suggests that the direct transmission rate outside care facilities is still quite low. However, it is feared that this could change over time and thus drastically increase the risk potential. Using the data already collected by the Robert Koch Institute, the new estimator can help to keep a better eye on the possible risks of this disease.

Unraveling the secrets of human mind

Their method of estimation can also be applied to neuronal activity in the brain, as the brain consists of many billions of neurons. Only a tiny fraction of this complex system can be measured simultaneously. The human brain, for example, has 80 billion neurons - ten times more than there are humans on Earth. The activity of only about 100 of these neurons can be measured simultaneously, for instance, in epilepsy patients. It is particularly important for these patients to know exactly how sensitive the network is and how easily seizures might develop. However, understanding the basic information processing in the brain also requires an understanding of the sensitivity and amplification effects in the brain. Surprisingly, the analysis of the Göttingen researchers shows that many classically regarded properties of individual neurons are almost identical, no matter how sensitive the brain behaves as a whole. The new method makes a precise characterization of the underlying network dynamics possible. „The method is very useful for the research on neuronal networks. In the long term, we hope to gain a clear understanding of how the different circuits in the brain work together when we develop a new idea,“ comments Viola Priesemann. The first application of the promising Göttingen method is already obvious for the researchers: they want to use it to investigate the interaction of the different brain areas in memory tasks in close cooperation with researchers from Berkeley and Bozeman in the USA.