Scientists from the Max-Planck-Institute for Dynamics and Self-Organization, as well as from the German Center for Heart and Circulatory Research, have found a new mechanism which leads to atrial fibrillation and even sudden cardiac death due to cardiac arrhythmia.

The most frequent cardiac arrhythmia in Germany is „atrial fibrillation“. Up to 1 million people suffer from the irregular contraction of the atria of the heart. Due to self-organized electrical impulses, the atria of the heart get out of sync. Atrial fibrillation is very dangerous, given that it accounts for about one in every four strokes. One method of ending atrial fibrillation is ablation, the targeted destruction of heart cells in areas of the atria which are selected by a physician. In the current edition of PNAS (Proceedings of the National Academy of Sciences), scientists from the Max Planck Institute for Dynamics and Self-Organization in Göttingen, Germany report about a so far unknown mechanism which leads to cardiac fibrillation. They show that areas of particularly good cardiac tissue can cause fibrillation. The scientists of the MPI suggest that the ablation of precisely this tissue can stop the atrial fibrillation.

Increasing the efficiency of clinical methods 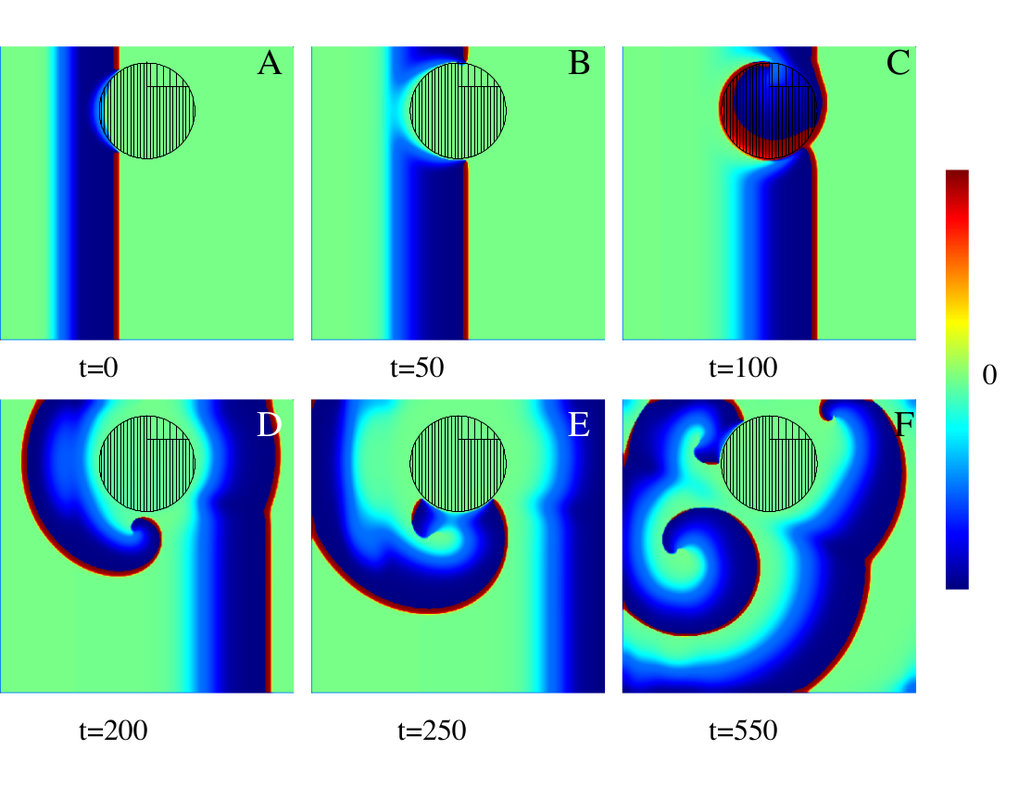 "With our theoretical work, we pursued the question of why inhomogeneity of the heart muscle causes cardiac arrhythmia. We focused on areas of particularly healthy muscle, which were considered to be completely harmless. To our surprise, we found that small and very healthy areas are remarkably effective in inducing self-sustaining electric rotors and, therefore, cardiac fibrillation" says Professor Dr. Eberhard Bodenschatz, director at the Max Planck Institute for Dynamics and Self-Organization. "Our results show that it might make sense to ablate these healthy cardiac areas in order to get the heart back on track," adds Dr. Vladimir Zykov, first author of the publication.

Back in 1946, Norbert Wiener and Arturo Rosenblueth had shown that self-organized electric rotors (and fibrillation) could be induced by areas of heart muscle with reduced activity. Until today, this mechanism was considered fundamental. However, a recently introduced clinical method demonstrates that human atrial fibrillation can be ended after the ablation of muscle areas at the location of the electric rotors. "This is surprising, since according to Wiener and Rosenblueth there should be particularly „bad“ tissue there and thus the ablation should generate and not prevent cardiac fibrillation", says co-author Dr. Alexei Krekhov of the MPIDS. "It was a mystery of why the ablation of tissue near a rotor ended the atrial fibrillation and, instead, did not reinforce the fibrillation and promote the reoccurrence of cardiac arrhythmia."

The Max Planck scientists Eberhard Bodenschatz, Vladimir Zykov and Alexei Krekhov used a mathematical model which is very general. It is applicable to many systems , for example: the simulation of electrophysical waves in cardiac or nerve tissue, excitation waves in the slime mold colony of Dictyostelium discoideum, or the autocatalytic chemical Belousouv-Zhabotinsky reaction. In their model, the Göttingen scientists at MPIDS and the German Center for Heart and Circulatory Research have found a solution to this mystery. Their simulations show that a localized area, capable of allowing a faster spreading of electrical signals, can act as a major barrier. There, electric rotors immediately develop, which can lead to cardiac fibrillation. This unexpected observation explains why the removal of such a pseudo-barrier close to the rotor reduces the possibility of atrial fibrillation.

The theoretical background, presented in the current issue of PNAS, provides an explanation for the new ablation method. Furthermore, it presents here to forth unknown mechanism that can lead to ventricular fibrillation and sudden cardiac death. The discovery of this generic mechanism of rotor generation opens up important new insights for the prevention of malignant electrical impulses of the heart muscle.