Direct Numerical Simulations of turbulent flows at large Reynolds numbers with a very high resolution have been used to probe our understanding of the extreme velocity gradients that can form in a turbulent flow. State-of-the-art simulations demonstrate that very large velocity gradients, which are orders of magnitude larger than their typical (averaged) value, follow a simple power-law. These extremely large gradients are typically organized in vortex tubes, which form a complex tangle in the flow, see Fig. 5.9. The magnitude of the gradients is ultimately determined by the strain acting on the tubes. As shown by the simulations, the strain is significantly weaker than vorticity itself (the conditional average of strain on vorticity grows with a power law, with an exponent smaller than 1). Elementary arguments relate this power law to the observed scaling law characterizing the most intense events. Our results provide essential data to test our theoretical understanding of turbulence, as well as guidance for experiments under way at extremely high Reynolds number at the MPIDS. (collaboration with D. Buaria, P. K. Yeung and E. Bodenschatz). 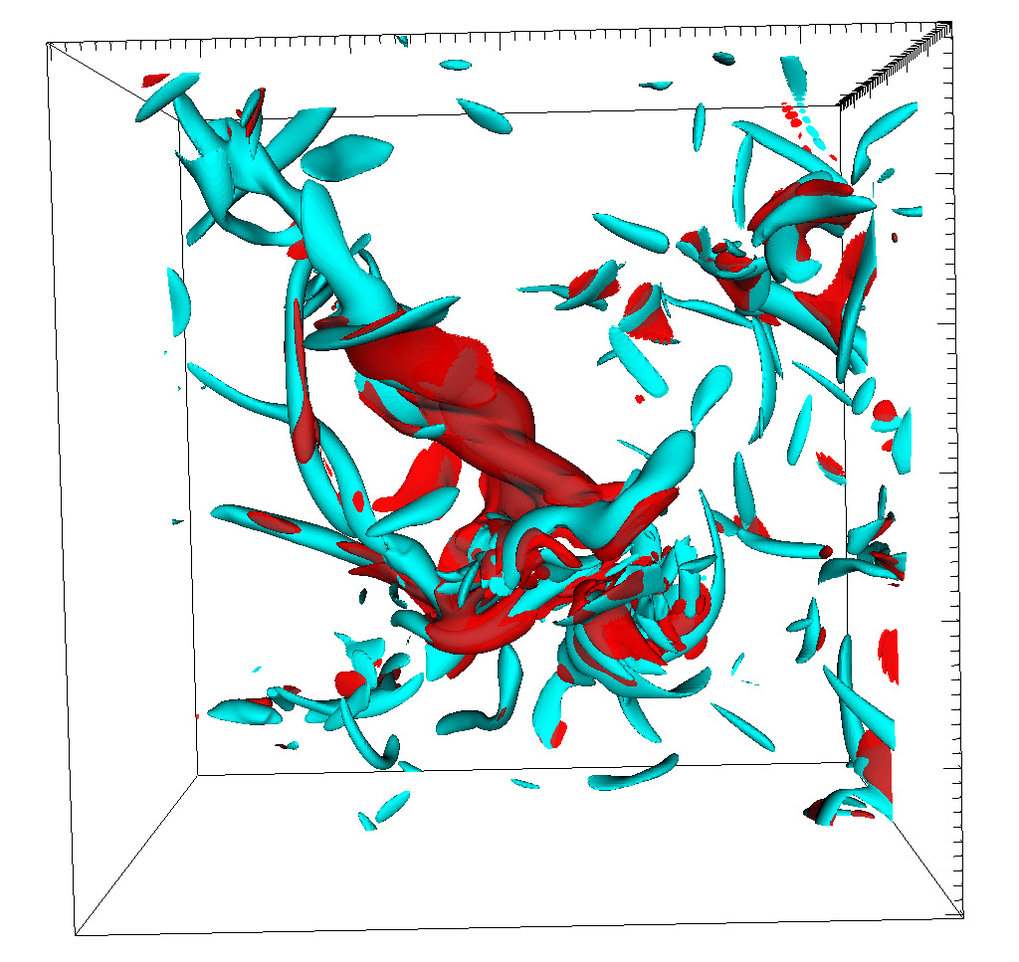 A different, but related line of research consists in studying the evolution of elementary vortex structures, and understanding how they lead to very small scales of motion. A canonical problem is provided by the head-on collision of two vortex rings. Early experiments had revealead that at low Reynolds numbers, the vortex rings reconnect and annihilate in a smooth (laminar) manner. At larger Reynolds numbers, small-scales proliferate during the collision. One of the reasons to re-visit the problem was to investigate the possibility of an iterative cascade of instabilities leading to the formation of very small scales, a possibility that has recently received much theoretical attention. The first results of a combined experimental and numerical study support the existence of a cascade of instabilities in the flow, whose mechanisms remain to be understood (joint work with R. McKeown, M. Brenner and S. Rubinstein, Harvard University, and R. Ostilla-Monico, Houston).

In an effort to understand the structure of turbulence in a realistic experimental configuration i.e. a wind tunnel, we have proposed a description of the decay of turbulence behind a grid. A generalized self-similar solution of the equations has been developed, whose results compare qualitatively well with the results obtained in the Varying Density Turbulence Tunnel at MPIDS (collaboration with H. Xu and P. Yang, Tsinghua University).

Transport in geophysical flows and collisions of Ice crystals in clouds

The enhancement of particle transport is a major property of turbulent flows. Transport of particles by a turbulent flow has been investigated in great detail in the case of the simplest possible flows, namely in flows which are istotropic and homogeneous. Although this is an enticing approximation, many flows of practical interest are more complex. As an example, geophysical flows, in the atmosphere and oceans, are affected both by stratification, and also by the rotation of the earth. Using direct numerical simulations, we investigate the transport of particles in the presence of these two effects, in situations of relevance to oceanography (collaboration with R. Marino, Lyon and A. Pouquet, NCAR).

The importance of turbulence to understand the aggregation of small particles (droplets or small crystals) in a cloud, to form rain drops, snow flakes, graupels or other precipitation particles has been known for a long time. Whereas much theoretical work has been devoted so far to droplets, we have been recently focusing on the presence of small crystal particles, that play an important role in deep clouds, which extend over a very high altitude, so the temperature in the upper part of the cloud is significantly below freezing. In such clouds, supercooled droplets coexist with ice crystals, which can be, as a first approximations, modeled as spheroids. To investigate the motion and possibility of collisions of crystals, we have simplified the problem by treating ice crystals, which are much smaller than the smallest scale in the flow, by neglecting the inertia of the fluid (assuming locally a very small Reynolds number of the fluid). The numerical work shows that at small turbulence intensity, the collisions are dominated by differential settling velocities, induced by different orientations. Turbulence plays a more significant role at larger intensity. This can be understood by using notions recently developed to understand the properties of collisions of droplets in a turbulent flow. Our simplifying assumption concerning the motion of the spheroids, however, needs to be carefully checked. One of the issues concerns the orientational bias of settling particles, which appears to differ between the model and the available experimental information. Preliminary studies show that this effect can be partly understood by using finite (fluid) inertia corrections, an effect we are actively investigating (joint work with A. Naso, E. Lévèque, ENS Lyon, and K. Gustavsson and B. Mehlig, University of Gothenburg).

Recent effort in collaboration with the MPIDS was devoted to the nucleation of droplets in the wake of precipitation particles settling at a temperature that significantly differs from that of the surrounding medium (collaboration with MPIDS).

In collaboration with the group at MPIDS, we are providing a description of the dynamics of actin polymerization. The formation of actin-driven protrusion is essential in the displacement (crawling) of cells towards a source of nutrients, or other chemical signals. Previous work had demonstrated that, in the absence of any stimulation, the dynamics of actin polymerization could be spontaneously oscillating, and describable in terms of a simple oscillator in the presence of (additive) noise. In recent work, we have characterized the transient response of Dictyostelium discoidem cells, initially in a spontaneously oscillating regime, following a stimulation by a pulse of chemoattractant. The response involves two distinct phases. First, one observes a very strong increase of polymerization at the cells periphery (cortex) for a short time (approximately 20s). This is followed by a longer transient period, over a duration longer than ˜ 100s, before the pre-existing oscillation regime is restored. A minimal elaboration of the oscillator model can reproduce the most significant features observed experimentally (collaboration with J. Negrete, Lausanne, and MPIDS).