"Soft Matter" is a designation of, e. g., emulsions, foams, colloids, polymers, gels, liquid crystals, and also cytoplasma. These predominantly fluid systems have in common a "flexible" internal structure which is determined by weak interactions and thus easily influenced by external fields or conditions. Accordingly, these systems possess at an interface, e. g., at the free surface or the interface to a solid, a structure which differs quite often from the corresponding bulk structure. In the case of heterogeneous multi-component systems like emulsions, there are in addition internal interfaces that essentially determine the structure and properties of these systems. Understanding the behavior of soft matter at interfaces is not only interesting from the viewpoint of basic research but also important for many applications; examples range from emulsion paint over printer ink and liquid crystal displays to membrane systems for drug delivery. 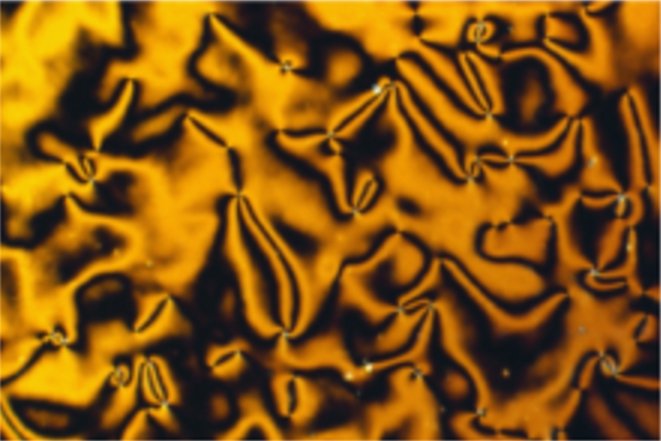 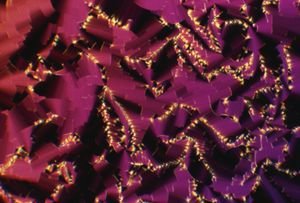 At the Max Planck Institute for Dynamics and Self-Organization our group investigates interfaces of fluid systems with liquid crystal components. These studies focus on several aspects: One point is the realization of model systems, which enable the experimental confirmation of theoretical predictions, for instance in the field of wetting phenomena. Another point is the development of novel heterogeneous fluid systems, in which the presence of thermotropic liquid crystal components results in new properties; e. g., the use of liquid crystal phases as continuous phase in digital microfluidics might enable new manipulation possibilities of the emulsion droplets in the microchannels. A further aim is the generation of micro- and nanostructures which might serve as matrices or templates for novel self-assembling or self-organizing soft matter systems.

Thermotropic liquid crystals are fluid phases of organic compounds with rod-like (or disc-like) molecules. Although these phases are fluid they possess molecular ordering characteristics which lead to attributes that are usually reserved for solids, e. g., optical birefringence and other anisotropic properties. A specialty of thermotropic liquid crystals is the rich variety of phase structures and phase transitions which occur in these materials. Even as homogeneous one-component systems, liquid-crystal phases can possess remarkably complex structures and properties which are intensely studied since several decades. In contrast, the investigation of liquid crystals as compononents in heterogeneous fluid systems like emulsions is still in an early stage, especially when the more complex phase types such as the different smectic phases are considered; the understanding of liquid-crystal structures and properties at interfaces and in confined geometries will be an essential part of such investigations and is the main focus of our studies.

The simplest liquid-crystal phase of organic compounds with rod-like molecules is the nematic phase; in this phase, the positional order of the molecules is the same as in an isotropic liquid but the molecules tend to align their long axes along a common direction (cf. Fig. 1 middle). At temperatures below the nematic phase range, often several smectic liquid crystal phases are present. These phases possess a certain degree of positional molecular order, which may be characterized as a layer structure or density wave along one spatial direction; the simplest phase is the smectic-A phase which may be seen as a stack of orientationally ordered two-dimensional liquid layers (cf. Fig. 1 left). Other smectic phases possess, e. g., certain in-layer ordering characteristics or a tilt of the molecules within the layers. If several liquid-crystal phases appear at different temperatures in the same compound, they are separated by well-defined phase transitions. 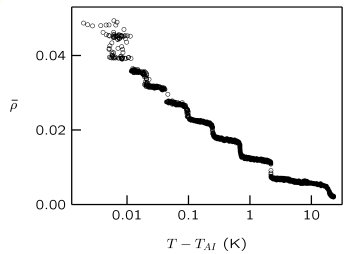 The bulk structures described above may be significantly modified by the presence of an interface. E. g., the surface of a glass plate or silicon wafer can be treated such that the molecules of the nematic phase align parallel or perpendicular to the surface; in the case of parallel alignment, also the azimuthal in-plane orientation can be influenced. Understanding and controlling these processes is essential with respect to technological applications, e. g., in TFT display devices.

Interfaces modify the structure of liquid-crystal phases also in the vicinity of the phase transitions of the liquid crystal. For most compounds a pronounced ordering effect is observed at the free surface and the interface to certain solid substrates: at temperatures a few K above the bulk transition temperature a thin layer with the structure of the low-temperature phase appears at the interface. The thickness of this layer can diverge or stay finite when the bulk transition temperature is approached; these behaviours may be also seen in the context of wetting as complete wetting (divergence) or partial wetting (finite layer thickness) of the interface by the low-temperature phase. We are using ellipsometry to study these pretransitional liquid-crystal wetting layers. Fig. 2 shows an example of a layer-by-layer growing smectic surface phase above a smectic-A − isotropic transition. 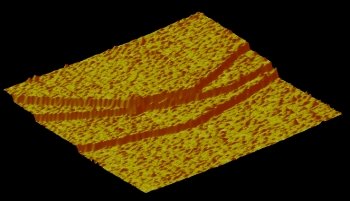 Our current studies focus on surfactant -laden liquid crystal interfaces, μm-thick films with antagonistic boundary conditions, structures and dynamics in ultra-thin smectic films, smectic membranes in aqueous environment, and microfluidics of nematic liquid crystals and nematic colloids.
Besides several optical methods such as polarizing microscopy, confocal polarizing fluorescence microscopy, single molecule fluorescence microscopy, and ellipsometry, we are also using AFM microscopy for the study of liquid-crystal surfaces. Although they are fluid phases, the surface of smectic liquid crystals may be imaged by tapping-mode AFM microscopy; under certain conditions, which reduce the interaction between tip and sample surface to a minimum, it is even possible to image directly the molecular layers of smectic phases (cf. Fig. 3).