We are living in a world driven out of equilibrium. Energy is constantly delivered from the sun to the earth. Some of the energy is converted chemically, while most of it is radiated back into space, or drives complex dissipative structures, with our weather being the best known example. We also find regular structures on much smaller scales, like the ripples in the windblown sand, the intricate structure of animal coats, the beautiful pattern of mollusks or even in the propagation of electrical signals in the heart muscle. It is the goal of pattern formation to understand nonequilibrium systems in which the nonlinearities conspire to generate spatio-temporal structures or pattern. Many of these systems can be described by coupled nonlinear partial differential equations, and one could argue that it is the field of pattern formation is trying to find unifying concepts underlying these equations.

We investigate complex pattern formation in a system for which we have excellent experimental control and where the underlying equations are well known: Rayleigh-Bénard convection. This is a system where a horizontal fluid layer is heated from below and cooled from above, so that above some critical temperature difference convection rolls form. This system as been experimentally investigated since for more than a hundred years, but modern experiments in compressed gases allow the fine control needed to get good quantitative results. 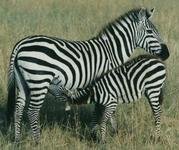 While much work has focused on the horizontal case, our experimental system was designed to allows us to incline the fluid layer so that both buoyancy and shear are present as instabilities. The resulting anisotropic convection patterns exhibit a rich array of complex spatio-temporal behaviors, an example of which is shown at the right. Earlier work in the group involved the fascinating state known as "Spiral Defect Chaos", consisting of the perpetual nucleation and annihilation of rotating spirals (seen at upper left).

Much of our research has been and is centered around the quantitative understanding of these intriguing states. We have applied analyses of the local properties of the patterns to understand their statistical mechanics and temporal evolution, and developed methods for detecting and tracking the defects in the patterns.