From the striped coats of zebras to the ripples in windblown sand, the natural world abounds with patterns. Such patterns have been of great interest throughout history, and, in the last twenty years, scientists in a wide variety of fields have been studying the patterns formed in well-controlled experiments that yield enormous quantities of high-precision data. These experiments involving phenomena as diverse as chemical reactions in shallow layers, thermal convection in horizontal fluid layers, periodically shaken layers of sand, and the growth of slime mold colonies often display patterns that appear qualitatively similar. Methods are needed to characterize in a reasonable amount of time the differences and similarities in patterns that develop in different systems, as well as in patterns formed in one system for different experimental conditions.

Another property of a striped pattern is the local wavenumber. It often describes whether the system is stable or unstable. If we have a defect in the pattern it might also determine how fast it moves. It is known that curvature may also be important in determining whether a pattern propagates (travels). We are investigating thermal convection in a fluid to study in these pattern forming properties. Our interests have been so far in isotropic Rayleigh-Benard convection and anisotripc inclined layer convection. 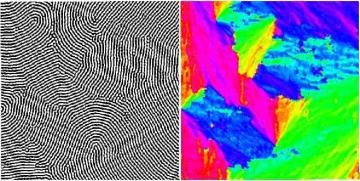 We (David Egolf, Ilarion Melnikov, and Eberhard Bodenschatz) developed a method to measure properties of patterns. For example, for striped patterns one would be interested in the local spacing of the stripes (wavenumber) and the orientation of them. In other words a pattern is described by a wavedirector. The director is a vector with two arrows since it can only give the direction of the stripes.

This is demonstrated in a scanning electron micrograph of a block copolymer structure and a false color plot of the orientation (obtained in 1.5sec on a SP2 node, see our publication). In the upper picture white corresponds to Polybutadiene cylinders and black to the Polystyrene matrix. The upper picture is from Harrison et al. from Princeton University and the lower one is the orientation calculated by our analysis.