Given the importance of mineral oil to the world economy, the relevance of a detailed understanding of the physical mechanisms involved in oil production, as well as oil retention in the reservoir rock, is obvious. However, the variance and complexity of oil reservoirs confronts scientist with a tangle of problems hard to unravel. To create a better understanding, BP International Inc. established the international research program ExploRe (EXPLOratory REsearch). Our department contributes via the research project GeoMorph (Göttingen exploration of Microscale oil reservoir physics), which is funded within this research program since 2009.

The general situation is sketched in Fig. 1, which identifies the relevant parameters of complexity. Present understanding is roughly at the red dot, where liquids never more complex than a mixture of two simple fluids are distributed within a porous medium at most as complex as a pile of spherical beads. But for coming any close to reservoir reality, the fluid must be allowed to be a mixture of both aqueous and non-aqueous liquids, with solids suspended in it, and the rock must be allowed to be inhomogeneous in shape, size, and composition of the grains. Furthermore, a full account of the situation in oil production includes dynamic effects, which may be envisaged as a third axis perpendicular to the paper, as indicated by the Cartesian tripod to the right. This is probably the most challenging of all parameters, since it takes the system far off equilibrium. 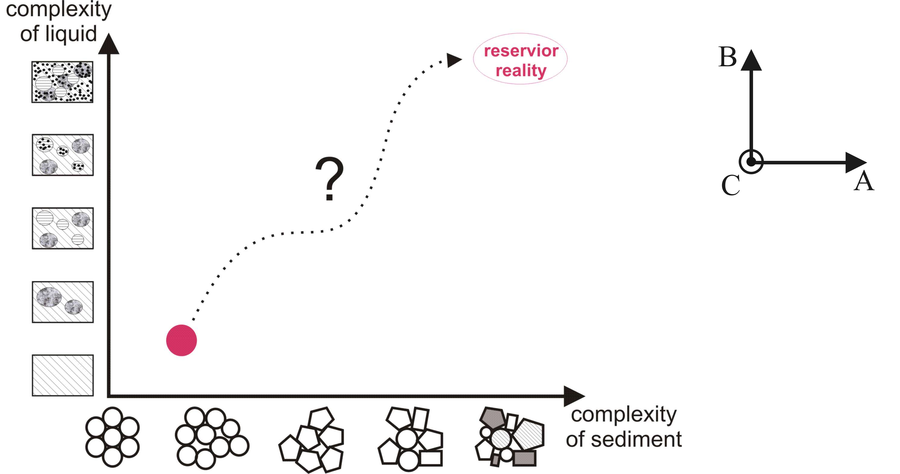 At first glance, any reliable prediction on a system as complex as this may seem impossible. However, complex systems sometimes reveal amazingly universal aspects, giving rise to regularities which simplify the matter a lot. A simple example is the capillary pressure in a saturated granular pile (i.e., the level of the water table), which is directly determined by its specific inner surface area and by the cosine of the contact angle, averaged over the grain materials present in the sample. Very recently, we discovered an important regularity for unsaturated samples: although the liquid inside a pile of wetted grains (such as the water in a sand castle) assumes enormously complex geometric structures, which strongly change their morphology as the liquid content is varied, the mechanical properties of the wet granulate remain almost perfectly constant. The commonplace observation that no one needs a recipe book to build a sand castle turns out to rest on a simple geometric rule relating the Laplace pressure of the liquid clusters within the sample to its packing geometry: we need not know the exact details of the packing, but only a few typical quantities characterizing the microscopic nature of the system in order to infer, by means of the above mentioned regularities, its mesoscale or even macroscale physical properties. Furthermore, our results showed that in a wide range of filling ratios, the interstitial fluids coexist in a bi-continuous morphology, the flow resistance of which should depend only weakly (if at all) on the filling ratio. These regularities are not captured in pore-throat models, which are commonly used for modelling flow in porous media.

We are sure that there are many more such regularities awaiting discovery, concerning both static and dynamic aspects. They provide an indispensible link between microscale characteristics and mesoscale properties of an oil reservoir, or any other system of similar complexity. It shall be the central focus of our endeavour to search for such regularities. The main objective is to find the essential microscopic quantities which must be collected from the system under study, and their relation to the mesoscopic characteristics of interest. Once these quantities are identified, detailed predictions on production-relevant parameters become possible on the basis of a few easily obtained pore scale data.

Within the framework of research program funded by BP inc., we have investigated the impact of geometry and wettability of a porous rock material on production-relevant parameters, such as the residual oil saturation. For some model random materials, a number of so far unknown universalities have been identified, which might become crucial for the prediction of reservoir parameters on the basis of a small amount of sample material. One example is the scaling of the invasion pressure with the correlation length of heterogeneities in wettability, which was found to extend well beyond the pore scale [1]. We have furthermore been able to point out a general scheme of describing grain roughness in a way which enables quantitative predictions of production enhancement upon salinity reduction [2,3,4]. Moreover, it could be shown that a wetting transition known so far only for rather artificial two-dimensional models (the Cieplak-Robbins transition) [5] can not only be extended to the three-dimensional case, it is also amenable to analytical treatment on the basis of simple geometrical information, and thus potentially very powerful in predicting low-salinity yields and residual oil saturations in general. It could also be shown that the predictions change only slightly if some diagenesis is present.

It is now of great interest to study quantitatively how far these universalities carry into the realm of real reservoir rock morphologies, beyond the model geometries investigated so far. For instance, it should be studied how the predictions of residual oil saturation based of the Cieplak-Robbins transition are modified when non-spherical beads are used. It is to be expected that the theory holds in general for convex shapes, but this needs to be tested. Another line of study should be whether the scaling of invasion pressure with the correlation length of wettability changes if the rock is composed of non-spherical particles. Finally, it is of substantial interest how the theory of wetting on rough surfaces is modified in response to the curvature of the supporting surface.

This understanding will be used to develop tools to:

All of these investigations will be carried out numerically on the basis of data derived from natural rocks. Concomitantly, model materials which consist of increasingly non-spherical grains (Ottawa sand etc.) will be investigated experimentally (X-ray micro-tomography).