1915:
The Kaiser Wilhelm Society founds the Aerodynamical Experimental Station on the premises between Böttinger and Bunsen Street

1924:
The Kaiser Wilhelm Institute for Fluid Dynamics is opened at the same location and united with the Aerodynamical Experimental Station

1945:
The British military government shuts down both research facilities

1948:
The institute becomes part of the Max Planck Society

1993:
The last department working in fluid dynamics is closed

1996:
Prof. Dr. Theo Geisel is appointed and opens the Department of Nonlinear Physics

2001:
The last department in molecular physics is closed

November 19th, 2004:
The institute is renamed Max Planck Institute for Dynamics and Self-Organization 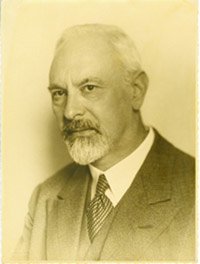 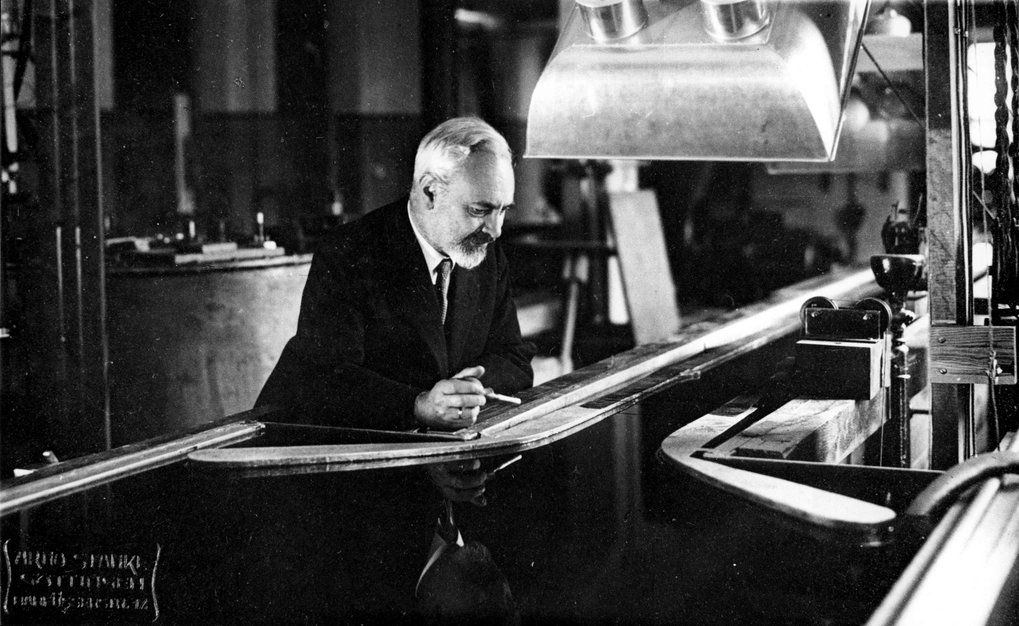 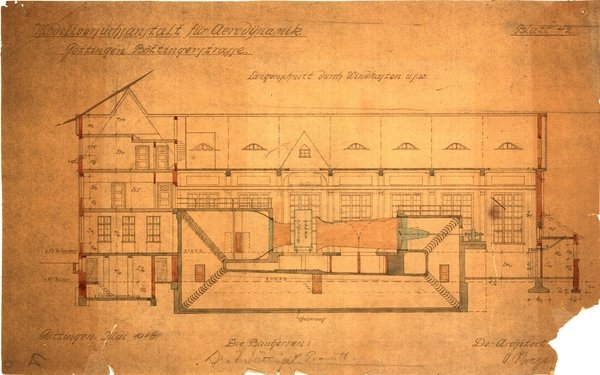 In 1904 Ludwig Prandtl accepted a position as professor for Technical Physics at the University of Göttingen. Here he continued his research in fluid dynamics that he had started as professor in Hannover. One of his experimental setups was a water channel, into which different obstacles could be inserted. Soon however, Prandtl wished to conduct more application-oriented research in larger test facilities. This became possible in 1907 with the foundation of an experimental facility in the Hildebrandt Street. Here Prandtl built the first German wind tunnel and thereby established the so-called "Göttinger type" of wind tunnels. Unlike those created by Gustav Eiffel in France wind tunnels of the Göttinger type feature a closed cycle for the liquids or gases to flow in. The founding of this experimental facility is the starting point of the later Aerodynamical Experimental Station.

When on January 11th, 1911 the Kaiser Wilhelm Society, the preceding organisation of the Max Planck Society, was founded in Berlin, Prandtl acted again. Only one month later he appealed to the new organisation in a memorandum. In it he asked for an institute for fundamental research in fluid dynamics to be built in Göttingen. As reasons for his choice of location he listed his own previous research and the high esteem of mathematics at the University of Göttingen.

The following negotiations lasted for over a decade and were interrupted by World War I. The Kaiser Wilhelm Institute for Fluid Dynamics was not opened until 1924. It was located on the premises between Böttinger and Bunsen Street, where it is still found today. Ludwig Prandtl was appointed head of the institute. Before, in 1915 the application-oriented Aerodynamical Experimental Station had been founded at the same location. The wind tunnel that Prandtl had built in the Hildebrandt Street was moved to the Bunsen Street in 1918. With the foundation of the Kaiser Wilhelm Institute both the new institute and the Aerodynamical Experimental Station were united under the name "Kaiser Wilhelm Institute for Fluid Dynamics together with the Aerodynamical Experimental Station".

Also in 1969 the Max Planck Institute began to focus on new fields of research and received three departments for molecular physics: Atomic and Molecular Physics, Molecular Interactions and Reaction Kinetics. In the following years this field of research became more and more important until in 1993 the institute discontinued all research in fluid dynamics.

In 1996 the institute again chose a new research focus and appointed Prof. Dr. Theo Geisel, who opened the Department of Nonlinear Dynamics. By 2001 all departments dealing with molecular physics had been closed. With the appointment of Prof. Dr. Stephan Herminghaus and Prof. Dr. Eberhard Bodenschatz in 2003 and the founding of the Department of Dynamics of Complex Fluids and the Department of Hydrodynamics, Pattern Formation and Nanonbiocomplexity fluid dynamics returned to the institute. However, now this field of research was put into the larger context of self-organized and nonlinear phenomena. This development led to the renaming of the institute on November 19th 2004. Since then the institute is called Max Planck Institute for Dynamics and Self-Organization.

In September 2016 Prof. Dr. Geisel became Emeritus and is operating his department Nonlinear Dynamics as an Emeritus gruop. Im March 2018 Prof. Dr. Ramin Golestanian was appointed as Director at the MPIDS and founded the department Living Matter Physics.